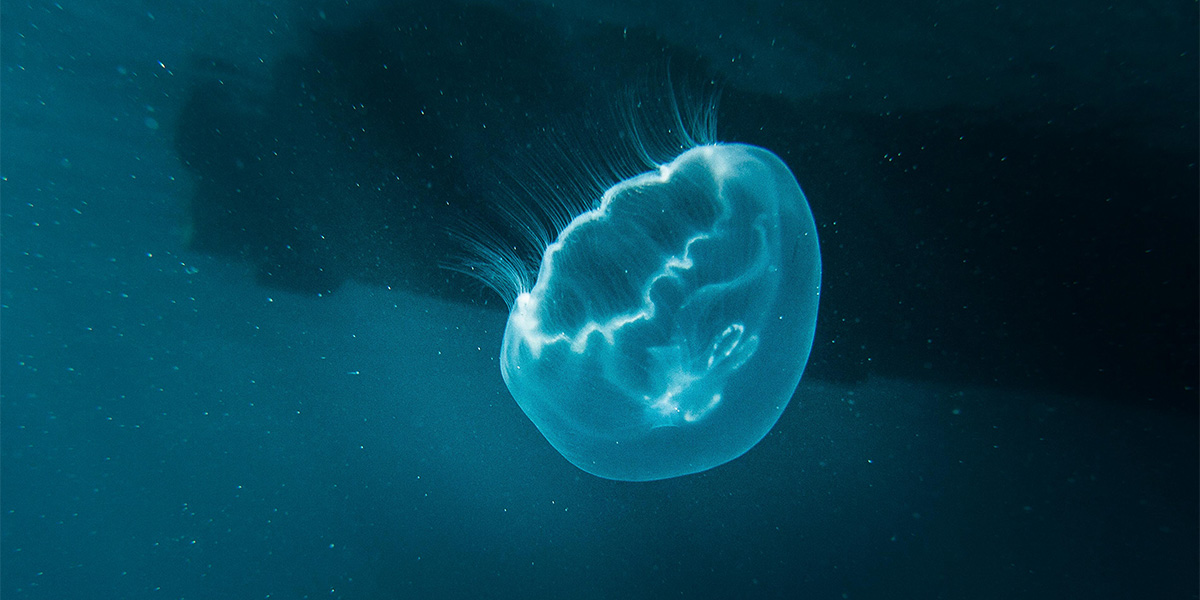 Moon jellyfish are one of the more common species of jellyfish that frequent Cornwall’s inshore waters. Luckily for humans, their sting is very weak and can’t penetrate our skin, although if you touch a moon jellyfish’s tentacles and then rub your face then you may feel something – which we don’t advise! These jellyfish live in large groups (called smacks), largely because when feeding conditions are good they tend to reproduce and their young mature at the same time and are carried by the tides and surface winds in a large group. Moon jellyfish can ‘swim’ by pulsing their bell, but often not enough to strike out on their own and where they end up is a result of ocean currents and winds.

Their name comes from the four ‘moons’ visible in the middle of their otherwise translucent bell – these moons are in fact the organism’s reproductive organs – with the male’s moons being white, and the female’s being pink. They have short tentacles around the edge of the bell and four thicker mouth tentacles underneath. Small planktonic species such as small fish, crustaceans and worms are caught in a layer of mucus that covers the bell, and then tiny hair-like structures called cilia carry the prey to the edge of the bell where the mouth tentacles pass it into the mouth. If food is scarce, then the moon jellyfish is able to shrink to 1/10 of its normal size in order to preserve energy and survive!

Moon jellyfish typically grow to between 5 and 40cm in diameter, although we most commonly find specimens around 20cm in diameter. Occasionally we have seen larger moon jellyfish, once with small fish visible within the translucent bell being slowly digested! The biggest threat to these other-worldly creatures comes from Ocean Sun Fish, Leatherback Turtles (which migrate across the Atlantic and time their arrival with the largest jellyfish swarms in late summer), and gulls. With less of these larger predators found in the oceans in recent years, the frequency and size of jellyfish smacks has increased. Gulls and other sea birds have an advantage when hunting jellyfish of course, because they attack from above – out of reach of the tentacles.

Whilst encountering moon jellyfish (like all jellyfish) often causes a reaction of shock and trepidation upon first sight, if you are wearing a wetsuit (which you do during all of our activities) then these largely harmless Medusozoa’s are of greater interest than they are a threat. Our guides will always tell you about them whilst out on a session (particularly during one of our marine biology focused ecoasteering sessions), perhaps even scooping one up out of the water for you to take a closer look at before returning it to continue its life bobbing along in the big blue.

Our thanks to Joel Sharpe for sharing his beautiful photography with us.